Apple Fitness+ is available without an Apple Watch with iOS 16.1, testers say 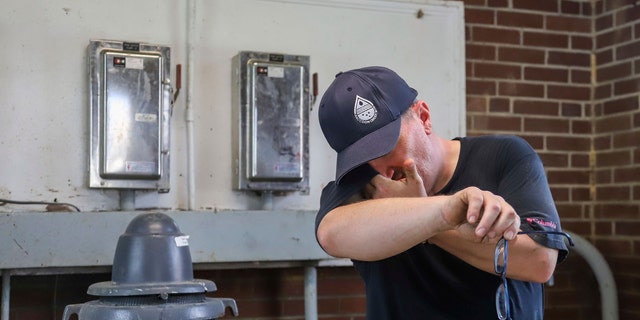 Chattooga County officials said water for 8,000 customers in Summerville, Menlo and surrounding areas would remain out of service through at least Wednesday.

Chattooga County emergency management officials said Tuesday said that one raw water pump was operable at the city of Summerville’s plant but work continues to restore two others. Officials are worried that flooding damaged electrical components in the plant, but flooring manufacturer Mohawk Industries loaned fans to the city to try to dry out critical components. Other machinery that controls the pumps that push water into distribution pipes was being replaced Tuesday.

POLICE CALLED ON GEORGIA COLLEGE STUDENT TRYING TO BUY HOMELESS MAN FOOD: ‘I THOUGHT I WAS GONNA GET ARRESTED’

Some other areas were being told to boil water to remove possible impurities.

Jason Green, of the Summerville Water Treatment plant, wipes sweat from his face while working on Sept. 6, 2022. After flooding in Chattooga County, many residents have been left without water.
(Olivia Ross/Chattanooga Times Free Press via AP)

Water was being distributed by government agencies and private groups, with showers being offered to those without water in nearby Trion. Affected residents were also being offered hot meals, flood cleanup supplies and clothing.

“It’s a God thing,” Pastor Sammy Barrett told WGCL-TV. “If you put the word out, and if you pray hard enough, God answers your prayers,”

“Without water, we are unable to flush toilets, wash hands, drink from the fountains, or prepare lunches,” Chattooga County Superintendent Jared Hosmer wrote in a message to the district’s students and families.

The smaller Trion city school district, which gets its water from a separate supplier, held classes Tuesday. Chattooga County offices and courts were closed, with some county buildings among those flooded in Summerville.

Georgia Gov. Brian Kemp is scheduled to tour damage Wednesday in Summerville after earlier declaring a state of emergency in Chattooga and Floyd counties.

The National Weather Service says radar estimates show 10 to 12 inches of rain fell within several hours, with higher amounts in some areas. Forecasters say a very moist atmosphere and winds that pushed storms along a stationary frontal boundary, set up conditions for what they called “an anomalous event”

It’s the second time in recent years that some Summerville residents have gone without clean water. In 2020, the city advised residents not to drink the water, although they could still use it for other things, after the U.S. Environmental Protection Agency found high levels of some chemicals. The city raised rates to build new wells.

Morning Joe Cheers For Dems: ‘Momentum Shift, Turning Point, On A Roll, Wind At Their Back!’

Republican regrets appearing in ad with Griswold, asks her to pull it before election

Diana’s car auctioned as 25th anniversary of her death nears

She’s 86. She’s 28. They love their hang time as the wallpaper queens of Los Angeles.