Advertise with us!
Monday, September 26 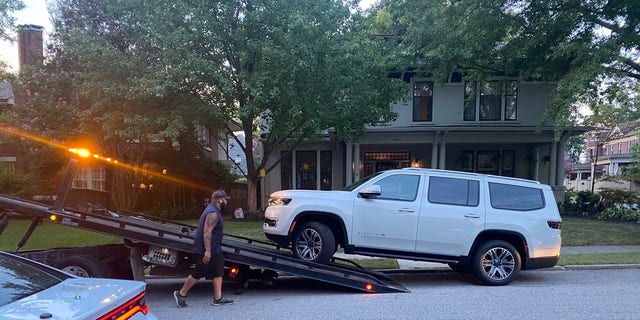 An SUV was towed Friday night from outside the home of a Tennessee woman abducted while on an early morning jog.

Authorities took the white Jeep Grand Wagoneer from in front of the 34-year-old school teacher and mother Eliza “Liza” Fletcher’s home the same day she was abducted during her jog.

It is unclear who the vehicle belongs to. The Memphis Police Department did not immediately respond to Fox News Digital’s request for comment.

According to investigators, Fletcher was jogging near the University of Memphis when she was “abducted and forced into a mid-sized, dark-colored” GMC Terrain SUV at around 4:30 a.m. Friday.

An SUV was towed Friday night from the front of the home of the Tennessee woman abducted on her jog.
(FOX 13)

Fletcher has been described as 5-foot-6 and 137 pounds with brown hair and green eyes. She was wearing a pink top and purple shorts and had her hair in a bun when she was kidnapped.

Police were alerted about the abduction at around 7:45 a.m. after the woman failed to return home from her run.

“Upon arriving on the scene, officers were advised that a female was jogging in the area at approximately 4:20 a.m. when an unknown individual approached her,” police wrote on social media. “The female was reportedly forced into an SUV and taken from the scene.”

Fletcher’s phone and water bottle were found outside a house owned by the University of Memphis.

A $50,000 reward has been offered to help find the missing woman. The suspected abductor has only been described by investigators as a male.

According to investigators, Fletcher was jogging near the University of Memphis when she was “abducted and forced into a mid-sized, dark-colored SUV” at around 4:30 a.m. Friday.
(FOX 13)

The FBI and Tennessee Bureau of Investigation are reportedly helping search for Fletcher.

Anyone with information related to the abduction is urged to call Crime Stoppers at 901-528-CASH.

When the Washington Post Breaks Out ‘Both-Sidesism’ — Victims of Communism Museum!!

Networks Remember Ronald Reagan and the Queen: ‘He Was Her Favorite President’

A growing number of Native households in Nevada lack plumbing

To Float or Not to Float: Munger and Roberts on the [Un]examined Life